Japanese pro wrestling superstar Nobuhiko Takada had been calling out the legendary Brazilian fighter Hickson Gracie, who did not even acknowledge him.

Yoji Anjo, a famous pro-wrestler back in Japan, headed down to LA to challenge Hickson Gracie to a fight. Yoji showed up at the academy while Rockson (Hickson’s eldest son, RIP) was there, asking where Hickson was, and refusing to leave if Hickson did not fight him. The students called Hickson who was at home, and Hickson arrived soon after. There were tons of Japanese reporters outside, and Hickson did not allow them inside his academy.

Only one of his students filmed the fight, which has never been available. Anjo was a bloody mess after the fight. This is what Hickson looked like afterwards. 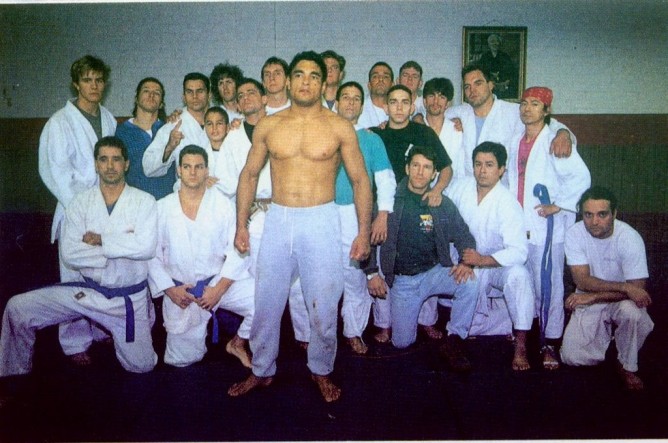 The only copy of the tape is held by Hickson, and he has never released it. However, Gordon Hester has watched the tape with Hickson, and offers a narrative of what happens.

As for the lead up, if I recall there was bad blood between Hickson and some fight group in Japan called “Rings”. Hickson beat their top fighter and they sent Anjo to avenge that fight. I would guess he made the announcement at some Pro Wrestling event since there were probably about 10,000 people at the event. If I recall, Rings did Pro Wrestling and MMA.

As for the fight, Hickson was home when Anjo and a big crew showed up at his school. Hickson got the call and drove over. They kicked all the media out of the room and then Hickson’s group filmed the fight. Anjo was bigger than Hickson. No refs and a real fight. Hickson traded some kicks and then eventually went in and got the clinch. He immediately went to the mount and never lost that position. From there he just beat up Anjo with punches. One time Anjo turned over and Hickson kept pounding him in the neck instead of choking it. Hickson told me he wasn’t done punishing him. He rolled back over and took a massive beating including one shot that looked like his nose split in half. He rolled over again and Hickson choked him unconscious and left him in a pool of blood. Hickson didn’t have a scratch on him.

I remember discussing the violence of the fight with Hickson. I felt like he really gave that guy a much bigger beating than necessary. He explained to me that when he let the media back in, there needed to be no doubt who won. Anjo went to the hospital. Hickson celebrated with his students. I was told this was big news in Japan and there were certainly lots of pictures that floated around of Anjo being a beaten mess. If I recall, he later sent Hickson a gift to apologize, sort of a Samuri thing.

As for the small guy that showed up afterwards, it was just a goof. Some reporter came to Hickson’s school and was meet at the door by Lemon and Rockson. The funny part of the video is Rockson telling the little reporter he had to beat him before he got a shot at his dad. As usual, Rockson had to be controlled because he was always ready for a fight. I think Rockson would have destroyed the little reporter since he was not a fighter. RIP Rockson. I miss you.

I do hope the video comes out some day. It wasn’t like an MMA fight. There were no rules and no refs. It was basically a street fight in a dojo. People and fans of MMA today don’t realize that this is how Hickson and many fighters of his time grew up. Vale Tudo fighting is way different than MMA.

I also remember Hickson having absolutely no emotion about the fight. It was sort of odd to see someone in that situation talking through the fight when we were watching it and explained it without the least bit of emotion. He also showed no emotion before or during the fight. It supported my belief that one of Hickson’s greatest gifts was his mind. He sort of reminded me of a socio path when he fought, only thought and no emotion regardless of the situation. Anyway, that is the story as I remember it."